As you may have guessed from my last blog Peeps and I were at the spectacular St. Charles Literature Festival in Illinois . . .

When I visited Haines Middle School look what we had for lunch . . . 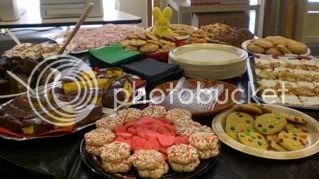 (For the record, there were sandwiches and salads, too.)

During a break, I thought I'd listen to Wendelin Van Drannen while I crocheted a coat. Only, I don't know how to crochet. I brought printed directions but they discombobulated me. Sadly, here's what I made before giving up . . .

Happily, a student made me a totally cool present(s) . . .

(Above: A tiny donut and bird. Thanks Maddy!!!)

I wasn't the only one to get a gift. Peepy got one, too. And it was from Silly Chick extraordinaire Andrea Beaty!!!!

(Above: Andrea tries to protect Peepy, who is wearing her new felt crown, from the mutant Dalek Bad Guy--he's the black blob next to Peeps.)

Sigh. Now that she has a felt crown, Peeps has gotten a little full of herself. She insisted on wearing it to the Stonehouse, a totally cool store . . .

On Saturday morning it was time for a book signing at the library. How do you transport a dozen authors through the snow?

Up next . . . downtown Chicago--where it's -2 degrees--and a book signing for GOOD LUCK, IVY at the American Girl Place. (Plus, you won't believe what someone gave Peepy when they saw her at the library!)