(Above: This is Teen when she made a cameo in a Cartoon Network show.)

I said, “No, I was just there. But I’ll take you to San Francisco instead.” (New York is over five hours by air from our town. San Fran is less than an hour.)

I got tickets to New York. Only, I didn’t tell her. I wanted to see how far through the airport Teen would get before she noticed we weren’t going to San Francisco.

And now here’s the incredible/no-way/you-have-got-to-be-kidding part . . .
We checked our luggage.
We went through security.
We boarded the plane.
We put on our seat belts.
We listened to them announce, “This flight to New York will take five hours and . . .”

Immediately after taking off, Teen took a two-hour nap. Then woke up and ate lunch. Still no clue. It was FOUR HOURS into the flight when Teen became suspicious. She looked at the map on the TV and noticed that we had flown past Indiana . . .

That’s when Teen asked where we were going. Perhaps you heard her squeal with happiness when she found out we were going here . . .

And I got to see my agent Jodi Reamer and sign contracts for some chapter books I'm writing . . .

Immediately after, we pigged out at Emily Eber’s favorite restaurant, Serendipity 3 . . . 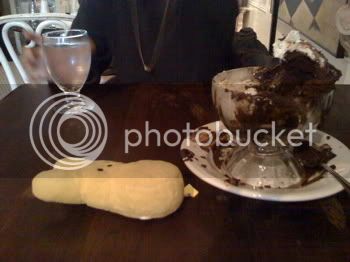 And if that wasn't enough sugar, right around the corner was Dylan's Candy Bar . . .

We did a TON of shopping, and saw the first of three shows . . .

Peepy, Teen and I were even on LIVE TV. We're not sure what the news story was, but we walked past while the camera was rolling . . .

We also partook in a fabulous lunch at trendy Bar 89 in SoHo with those divine Scholastic marketing and author appearance Dining Divas. (Note: These women are such serious foodies that as we were eating we discussed other meals.)

Oops! This is getting to be a loooong blog. More about the trip later. Until then, here’s Peepy with her new best friends in Times Square . . .