We were here and here, when we last blogged. Okay, so then it was time for the Golden Kite Luncheon. Peeps and I sat with our pal Mark Teague . . . 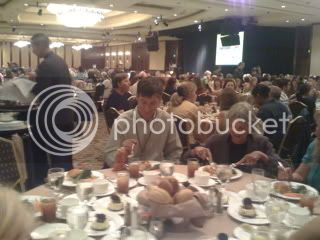 (Mark has many books about dogs and dinosaurs, but no Peeps . . . yet.)

Traditionally, the Sid Fleischman Humor Award is also given out at this time. This year there was no announcement. From the selection of books presented to the judges none met the criteria they were looking for.

Immediately after lunch, it was time for my Revision Workshop. I was thrilled to see that people showed up . . .

I always think no one's going to come. That's probably because my best friend once said he was throwing me a surprise party. Only he changed his mind, but didn't tell me. For WEEKS everytime I walked into a room I was prepared to act surprised.

Oops. I should have taken the Don't Ramble When You Blog Workshop. Back to the conference. One of Peeps friends showed up and it was just like old times . . .

Anyway, Alice Pope, Editor of Children's Writers and Illustrators Market, did a wonderful summary of the workshop. Here's Alice sharing cookies with Peepy . . .

Later, I did a YouTube video of ABSOLUTELY MAYBE, my young adult novel that comes out in February, for ReaderGirlz. The multi-talented Little Willow interviewed me. She brought along her Peep, too . . .

Then it was time for Peepy's manuscript critique with industry insider and snazzy dresser Mark McVeigh, Editorial Director of Aladdin/Simon & Schuster . . .

Peeps was convinced that Mark was going to offer her a multi-book deal. When it didn't happen, she lost her temper . . .

Dinner before the party was with Arthur Levine, Dan Santat and Teen, seen here--only Dan and Teen are hiding . . .

I struggled with whether I should still allow Peepy go to Steve Malk's Writers House party. (I'm represented by Jodi Reamer at Writers House.) Ultimately, I gave in . . .

Peep was on her best behavior when she talked with Caldecott-ian David Diaz . . .

However, I think she may have said something that offended actress/author Rhea Pearlman . . . 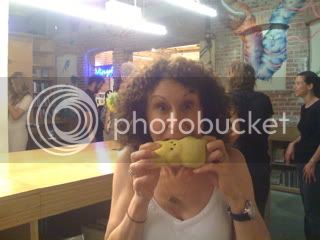 Next blog: Writers, illustrators and editors on a bus, book signings, and a board meeting