Sometimes authors spend many hours lovingly crafting their words, phrases, thoughts into something beautiful. But not here. Instead, I've lumped together some random this, that and the other thing(s). 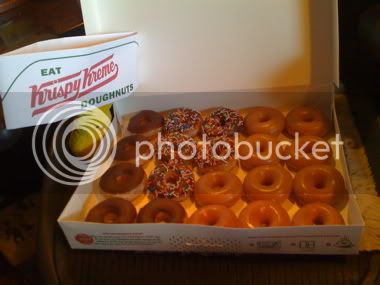 I was going over the galleys to my story for the GEEKTASTIC anthology . . .

. . . but got sidetracked trying to put this hat on my dog. It took a lot longer than I thought it would . . . 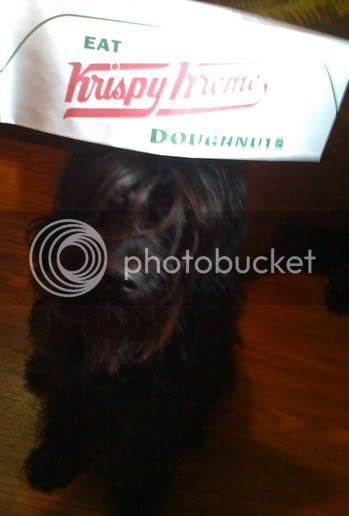 I can't wait until GEEKTASTIC-STORIES OF THE AWESOMELY UNCOOL comes out in the spring. Holly Black and Cecil Castellucci are editing and it features a Who's Who of YA literature, like Printz winner John Green, who I grilled a novel or so ago, NY TIMES bestseller Libba Bray, National Book Award winner MT Anderson, Brad Pitt and Scott Westerfeld who named a book after Peeps. (Okay, I made up something there, but I refuse to say what.)

A couple weeks ago Peepy and I were in Las Vegas for the Nevada Library Association Conference . . .

Then last week-ish I discovered that the second answering machine we have, that I thought was off, was on. There were sixteen old messages including one from SECURITY at the hotel I was staying at in Vegas. They wanted to discuss "THE INCIDENT THAT OCCURRED IN YOUR ROOM."

So I called, but their computers were down, and they couldn't recall it. They asked me what happened, and I couldn't remember either. All I remember is going to my room by 8 p.m. because of something Roger Sutton of THE HORN BOOK asked me to do. So if anything did happen, it's all Roger's fault.

Hmmm . . . or is it possible Peepy got into some mischief? 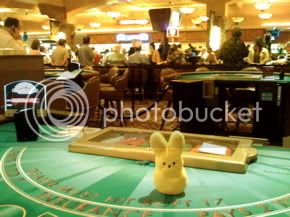 She's been quite full of herself ever since this . . .

The photo came to me via author David Lubar via librarian Kris Peters of the North Carroll Branch Library in Carroll County, MD.

On Saturday at 10 a.m. I will be the keynote speaker at the Grand Opening of the Alhambra Public Library. The library is right next to my high school. I used to cut class and go there all the time. What a dweeb! Here's what I looked like in high school vs me now . . .

BTW, it took about four hours every morning to get that HS hair.

On Sunday at 1 p.m. I will be at the West Hollywood Book Fair at the Fiction Pavilion. I'm on a YA panel, moderated by Leigh Purtill, along with Janet Tashjian, Joyce Lee Wong and CG Watson.

Last year at the Fair, there was the Lisa Yee/Lisa See Incident . . . 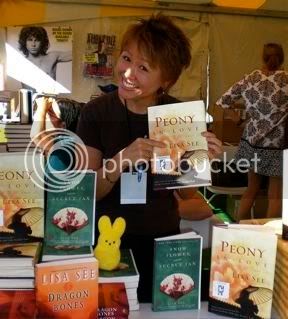 Apparently, the organizers thought that author Lisa Yee was author Lisa See, and instead of Lisa Yee's books, they had Lisa See's books.

Here is the only known photo of Lisa Yee and Lisa See together. It was taken here. See, Lisa Yee is not Lisa See . . .

Hopefully this year I will be able to retain my own identity. I'll let you know how it goes.