It seems like I was just home from Laramie, WY and studying the stars, when it was time to hit the road again.

This time, it was off to the Society of Children's Book Writers and Illustrators Summer Conference, hence to be known at the SCBWISCXYZ.

The SCBWI is the largest group of children's book writers and illustrators in the world, with over 22,000 members. I've been going to the conference for 14ish years, starting from before I was published. Now I attend as a Board Member and faculty. (I know! I can't believe it either.)

The night before the conference kicks off there's a faculty dinner. It's always fun to mingle and mash, although poor Peepy kept getting photobombed. Yes, she is that popular.

Sara Rutenberg looked refreshed as the conference first got underway . . .

Aaron Becker finally got his photo taken with his favorite Peep . . .

But then, wanting more, he photobombed her with Megan McDonald and agent Jen Rofe, and then Arthur Levine and Martha Brokenbough did, too . . .

The next day was the March of the Faculty, where we went on stage and introduced ourselves to the 12 million-ish conference attendees . . . 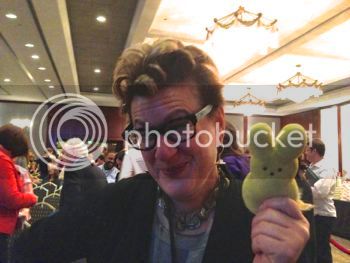 Speaking of Lin, she did a marvelous job (as always) hosting the conference, along with Stephen Mooser (hidden) . . . 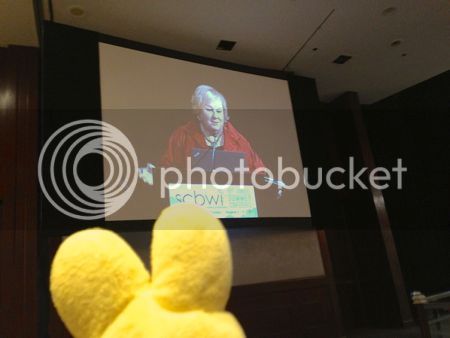 Perks of Being a Wallflower author/director Stephen Chobosky couldn't wait to meet Peepy, and then jumped into her shot with Jay Asher . . .

I had a book for Stephen to sign, but didn't feel like trudging all the way up to my room to get it. So I asked him to sign a slip of paper, and he did . . .

Every year for the past 246 years, my editor, Arthur Levine and I have a conference lunch . . .

The food fest continued with dinner with Linda Sue Park (looking small because we hadn't added water yet) and her editor Dinah Stevenson . . .

We love looking at the illustrator portfolios. While the judging took place, EB Lewis photobombed Peepy, while Arthur photobombed EB . . .

Of course, Marla Frazee and others industry insiders had to join in . . .

At the grand gala there was plenty of food and fun . . .

Later, during the multi-day conference, Peepy was still being photobombed wherever she went. Like from Newbery-er Cynthia Kadohata, and Ed Massesa, and who's that? Oh, JUDY BLUME (!!!) . . .

It continued with Ruth Bradshaw and Dan Santat, and Stephen Mooser . . . 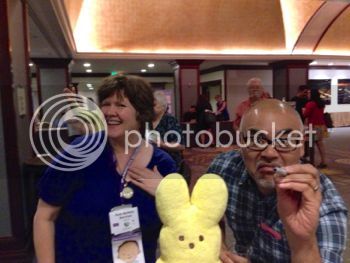 After the conference, there was a SCBWI Board of Advisors meeting. Want to know what goes on behind closed doors? This . . .

It was all too much for Sara Rutenberg . . .

And at last, Peter Brown, who had been stalking Peepy throughout the entire conference, finally got his photo taken with her . . .

The stress of all the photobombs made Peepy wish for calm. So we headed to Hawaii just in time for two hurricanes . . .

Anticipating everything being closed, we stocked up on food . . .

Still, the stocking up on food continued like poke and grilled garlic shrimp, and bbq, and . . .

We visited the Palace and ground, twice . . . 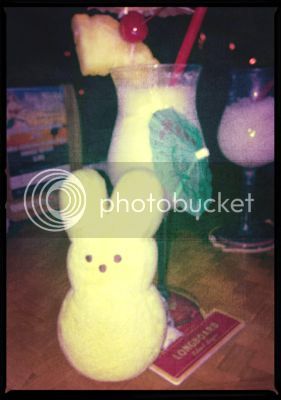 However, soon it was time to go home, do laundry, and then head back to New York . . .

Why were we there? For Scholastic Teacher Week, of course! We were on a diversity panel. Peepy met a friend in the Green Room before we went on, and I got to reconnect with panelists Varian Johnson and Sharon Robinson, and moderator Cheryl Klein (with Peepy) . . .

We were joined by by Sonia Manzano, Maria from Sesame Street!

There was a book signing, and Scholastic Store General Manager Michael Strouse arranged for the Teacher Week bags to match my dress . . .

After, it was lunch with my agent, Jodi Reamer. Dan Santat couldn't join us, but the series he illustrated did . . .

Of course, we had to eat, right?

We ended our NY jaunt with a trip to Juniors. I couldn't decide on the cheesecake or chocolate cake, so I got both . . .

Then it was back home to collapse.

Speaking of collapsing, I was going to add hot links to everyone's names and such. However, the last time I did it (and it took HOURS) for whatever reason the links didn't work. So this time, I'm not doing it to see if maybe they will work magically.

Oh, look! If you'd like an autographed book, order from Vroman's, tell them who you'd like me to sign it to, and they will mail it to you!"