We last left off in Atlanta where Peepy was being interviewed during the IRA Conference . . .

It had already been a MEGA day and was just gearing up. After our video interviews, I headed to the Joint Publishers Reception. The (big) room was filled with all 37,598 people (and one pretty Peep) and great hors d'oeuvres that I couldn't eat. That's because I was too busy hobnobbering with the likes of these attractive-award-winning-literary-types:

We also tete-a-teted with Fashion Icon and editorial director of Aladdin Paperbacks/Simon & Schuster, Mark McVeigh--seen here with Peepy as she tries to snag a book deal . . .

Next up was a small dinner party with Scholastic folks including Bestseller-ion Meg Cabot and Newbery-esque Christopher Paul Curtis . . .

Then I collapsed from exhilaration/exhaustion. Early the next morning I felt so wide awake (!) and perky (!). (Not really. I'm a night person.) After breakfast, it was time for an enlightening program on Middle Grade Reading where I keynoted . . .

At lunchtime, Peepy and I were able to find our old friends (not that they are old, it's just that we've known them a while) Brent Hartinger and D.L. Garfinkle . . .

From there, we hit the convention center where we met up with zillions of upstanding citizens. Like, Parents Choice choice Barbara O'Connor . . . 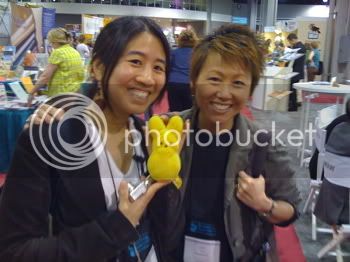 Printz-ly John Green (who I once grilled) and editor Julia Strauss-Gabel with their new book Aper Wns . . .

Mirrorstone editor Stacy Whitman--seen here with Peepy as she tries to snag a book deal . . .

All too soon, it was back to the airport. We weren't the only ones who were pooped. Guess who we caught sleeping? Yes, Golden Kite Award-oo Marla Frazee . . .